In my last article, I wrote about games I thought were sleeper classics. This time I’ve decided to write about the opposite. After all these games are just as memorable albeit for the wrong reasons.

These games ruined holidays and weekend rentals but instead of touching on the typical reasons that can make a game bad; I want to go a little beyond and focus on what ruined these games for me. Here are a few retro action games that were stinkers! Cover your nose and enjoy! 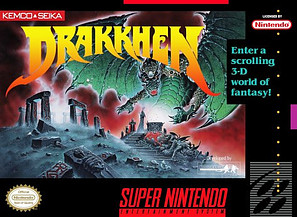 This was one of those games that I got for Christmas. At that time the WWF Royal Rumble game was at the top of my wish list and I hyped myself up all year over it. So Christmas finally comes; I go right to the gifts that I know are video games. I start tearing the wrappings, my excitement is rising. I’m ready to see my Royal Rumble game but instead its Drakkhen-disappointment instantly takes over. I looked the cover over from front to back; it might as well had been a rubix cube. Not wanting to come off as ungrateful, I put on an act of being excited but in my mind I was thinking, WTH!

As confused as I was by the cover; that was nothing compared to the game itself. Video games then and now are for the most part pretty simple. You start the game and its usually self-explanatory what you’re suppose to do. As soon as this game starts all I had was questions: Where are the characters? Where do I go? What do I do? The game had an open world style which you would think makes the game more fun; all it did was give me more room to run around clueless.

Fun was unintentionally placed on the shelf in order to figure this game out. Before I realized what the game actually was I geared myself to treat it like a mystery game. This delusional perception kept me playing but didn’t increase my enjoyment. 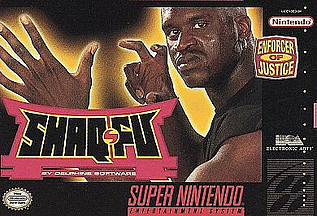 Before he was shaq diesel, he was the shaq attack; the big man that could do it all-basketball. Rapping, acting and martial arts…at least that’s what the game is claiming.

This one’s different because this is a horrible game. It does have a few enjoyable charms; for me it was some of the music. The problem with this game is that it doesn’t game you to care about it. I can’t recall having any real reaction to winning or losing. I think that’s because at I certain point you think: I’m playing a tournament fighting game named after shaq. That would be like playing a role-playing game named after Michael Jordan; who would want to play that?

Also Shaq Fu couldn’t have been released at the worst time. I don’t think it would’ve ever been considered a classic at any point; but what chance did it have when Mortal Kombat and Street Fighter were dominated the scene? At most, it could’ve been a solid game if was made into a spoof style fighting game. With Shaqs’ playful personality its something that could’ve worked.

Bruce Lee: Quest Of The Dragon

I’m Sure that Bruce Lee fans were the prime target for this game. I wonder if developers and distributors realized that we would be the most critical. For hardcore Bruce Lee fan, he is someone who has inspired as much off the scene as he has on it. Many of those particular fans could be gamers who would expect a Bruce Lee video game to be excellent at worst.

When you’re playing as an actual fighter or athlete, You want to feel like you’re controlling them in their entirety. Capturing their not only their abilities but also how they deliver is what makes for a great gaming experience. That’s the problem with this game; in no shape or form does it feel like Bruce Lee.

The Bruce Lee game for Super Nintendo, which I wrote about in my last article; of course doesn’t accurately display his physical abilities but included some details that gave it a more authentic feel. Going back to the game on xbox, its the one time when I had more fun playing as a Bruce Lee based character than playing as Bruce Lee. 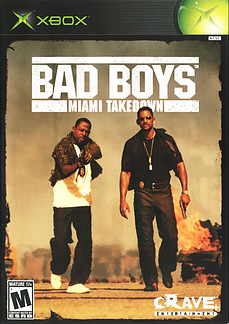 On paper a Bad Boys game sounds like a sure hit. The movie contained everything that would make for an enjoyable action game; how could it fail? It failed by not producing what it advertised.

Someone or someones decided to give the game the same cover that was used for the second film. Right there is the main problem because this is not a Bad Boy game at all. Starting with the story; in no way does it connect to any either first two movies. There aren’t even any easter eggs to be found which could’ve been a cool nod to fans of the franchise. As bad as this is, its not the worst. The game is missing what was its biggest draw. Despite being on the cover, neither Will Smith nor Martin Lawrence do the in-game voices. You’d think the creators would simply hire two actors who could impersonate the superstars and add a couple of soundbites from the movie-easy fix. Instead,. They used two actors who sound nothing like Will and Martin to deliver some of the corniest dialog in gaming. They don’t even try to hide it.

So the question is this; if they clearly didn’t even try to connect the game to the film, why call it Bad Boys?

To play defense attorney, I think the game was originally intended to be its own game. Perhaps it was at most inspired by the movie but was later changed to Bad Boys to up sales. Whoever was in charge of making that decision, they failed to realize that they didn’t have to mislead the customers; they already had a decent product on their hands. Had the game not been overshadowed by disappointment due to false expectations it may have been more successful.

Ironically, plenty of bad games continue to be played and I mean by those who’ve already written them off as being bad. Even I have to admit that if I came across Drakkhen, I would play it for all time sake. Why? Maybe its wanting to beat what we couldn’t beat in the past. Maybe its simply because like the titles we love, these games also have a place in our hearts-a smaller place, way in the back somewhere.

In closing, what’s a stinker to one person may be a sleeper classic to another. To fellow gamers, whichever game you choose to throw on; just enjoy and Play On!!

8-bit glitches, blowing in cartridges, coming up with methods to make the game work on the first press of Nintendo switches. We had some patience. With a “I” was how you pronounced Ryu, Mario’s rival was king koopa, the damsel was princess toadstool. N.B.A. jamming before the 2k, spending time playing live and creating M.J. […]

Sitting back, going down memory lane; I stop at my first time. Get your heads out of the gutter! I mean with video games. The first time I played new genres, the first time certain content made me feel uneasy. After thinking about all of that, I thought…what is it about these memories that’ve stuck […]