Sitting back, going down memory lane; I stop at my first time. Get your heads out of the gutter! I mean with video games. The first time I played new genres, the first time certain content made me feel uneasy. After thinking about all of that, I thought…what is it about these memories that’ve stuck with me, after all these years? Another question is why? I mean they’re just video games right? Many of us have moved on from this phase. When I think about these particular gaming experiences, I can remember and feel the joy clearly. I figured this alone makes it worth digging into a few memories. 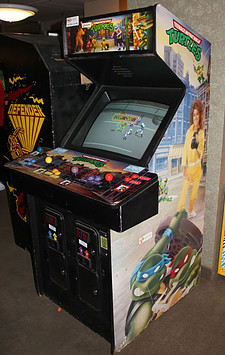 It’s the start of the 90s, the ninja turtle craze is still strong and I’m a big fan. I had just recently seen the first ninja turtle movie; my infatuation with the franchise is at an all time high. Little did I know, it would get higher. One day my mother took me and a friend to blimpies. When we got into the restaurant, I saw arcades in the back. That alone would’ve been enough to excite me but this time was different. On the cabinet, I saw artwork of the ninja turtles. Right away my friend and I ran to the machine. I’m sure my mouth was wide open and my eyes got big as I watched the games’ demo. The characters and the settings were true to the cartoon. The cherry on top was when the shows’ intro played, theme song and all. There was no way I was leaving without playing this.

This was the first time that I saw a game based on one of my favorite cartoon shows. It put the franchise in another stratosphere for me. Faithfully, I watched the show, the movie; I read the books and now like the action figures, the game gave me control over my favorite characters. Not only did I feel like I was in action sequences from the show, it felt like I was now seeing what I would imagine while playing with the toys.

As far as my first time playing the game, I didn’t even get to the first boss. What I saw in just 3-5 mins of gameplay, led to the 30+ years of love that I have for this game. 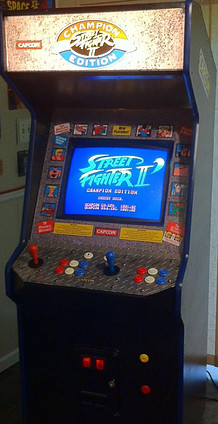 I have a special fondness for SF2. Ninja Turtles on the arcade will always be #1 to me. However, it was a little hard to find; so I only played it a few times. By the time SF2 hit the scene, I was a little older and able to travel alone a bit more. I would play this often at the local bodega. I don’t recall the first time I saw the game but it’s been one of my favorites from the moment I saw it.

I’m into the martial arts heavy. Any game with this kind of action is a winner for me. Up till that point, SF2 was one of the games that had more in-depth martial arts content. Where it raised the bar was in the variety it contained. Every character had their own fighting style, traits and mannerisms. This gave the gamers a wide range of options and had some effects on the battles -this holds mostly true if you were going against the CPU.

Where the game really shined was in it’s head-to-head mode. At that time going LIVE was you being there in the crowd. That’s not a knock on what’s happening today, but man…that Energy! When I write about crowds around an arcade machine, this is the game that I’m thinking about. This game made the crowd intense and brought out so many emotions. You’d get your quarter ready and step into the pit. You established your spot, like calling ‘next’ in a street basketball game. You scouted the skills of everyone that went before you. When it was finally your turn, you picked your favorite character and brought your best to all challengers. As I said in my Ageless Fun article, It wasn’t dangerous but it wasn’t for the passive 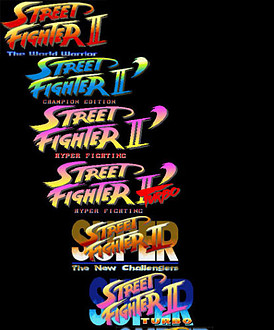 How many franchises do you know that got away with revamping the same game for what felt like years?

I know that Mortal Kombat is giving a majority of the credit as one of the titles that changed how the world sees video games. Fingers are mostly pointed to it’s content as being responsible for starting the rating system. I remembered the story. I don’t recall reacting to MK as everyone else did. Nah, for me.. Doom was my shocker and true introduction to the brutal violence in video games. I would rent this from the video store. Right out of the gate, what stood out was the red cartridge. All it needed was a warning under the title saying, Play at your own risk or Play if you dare.

This was the first time that I saw a first person shooting game. The only games that I Played were the side scrollers; where the action takes places from a distance. With Doom, the horror was coming right at you. Playing this game wasn’t boring by a long shot and it wasn’t fun either. What I mean is it wasn’t the kind of fun that I was used to. Now technically speaking, beat em up games are violent. It’s just with those games the violence is more cartoony or at worst arcade style. Nothing that would drop a parents jaw. Doom’s content was more realistic; how the guns looked and functioned and the kind of damage they caused. This made for an uneasy feeling for me 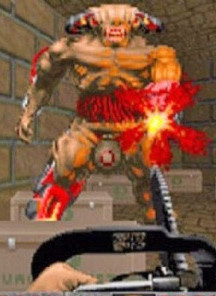 The first couple of levels felt like an action shooter. The music got me pumped as I ran rough shot on the enemies of the game. It’s kind of something that this was enough for me to get over the uneasy feeling. So far, not bad. It was on one particular level where the game took a different turn and the uneasy feeling escalated into something else. Starting with the music, in the earlier levels the themes were charged and faster paced. On this level the music was slow, disturbing and built tension. I started off shooting the levels and enemies, now like the music, I went at a slower pace and was really afraid of what would come next. This level had me so shook that when I turned off the game for the night, I jumped when I saw a vacuum cleaner in the shadows.

I didn’t play many of the Doom games afterwards and I was never a big fan of the franchise. I do want to play the new Doom Eternal game. Maybe I’ll write an article about the game after I play it. I’ll let you know if I’m jumpy after turning it off.

I’ve always seen the cinematic elements in video games even before the existed as they have for years now. As a child I would create sub-plots to go along with the games; I would even create stories to go with every level. It just gave me a bit more enjoyment while playing. When I played Ninja Gaiden it was right up my ally. Yes I liked the gameplay but what really grabbed me was the games cut scenes. 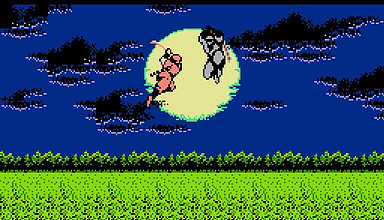 I’m a lover of story telling. I’ve always looked for the story in something; which is probably why I created stories to go with my gaming sessions. Back then video games were straight forward and had little to no story. As great as they were, there was a part of my imagination that wasn’t being stimulated. Ninja Gaiden wasn’t the first game to use cut scenes nor was it the first time I saw cut scenes in a game. What it did different and was the first that I saw, the cut scenes were being used to tell the games story. At the end of each level, which were among the hardest that I’ve ever played. Gamers would see cut scenes that progressed the story. This didn’t bring a complete end to me coming up with sub-plots but it did fill a void that I didn’t know was there. I would get immersed in the game as if I was watching a movie.

I look back at Ninja Gaiden and I think…wow, we’ve come some ways. Today, the cut scenes have evolved into content that rivals the movie industry. Ninja Gaiden took what was already there in gaming and used it in a new way. This was the beginning of games doing more than just giving gamers hard levels to complete. It was the beginning of where story telling in video games is today.

I’m not the kind of guy that lives in the past. There’s a lot of great things happening in today’s gaming world, opportunities that didn’t exist before. Just now and then, I think and feel feelings from the past that haven’t been matched or passed. I chalk this up to changing times. We get older and the ‘new thing’, takes the spotlight. Those games we grew up playing, that environment, that culture are of a different world; gone from the eye but not from the hearts and minds of those who lived it. And we are still here.

In closing, those golden memories are moments that hit beyond the senses and straight to the core. They should be built upon and serve as a reminder. A reminder that not only do we know what real magic looks like; we should never settle for anything that doesn’t give us that parallel feeling. Play On!