There’s two children in the 1990s; one’s watching cartoons and the other’s reading a comic book. The one watching TV sees a commercial come on and the one reading comes across an ad page-both are advertising video games’. While the commercial lasts only a few seconds and the ad page is looked over repeatedly the end result is the same. The ad’s made an impression and the children are hooked and sold. Those children were us back then.

Today video games’ seems closer to becoming a product that can sell itself; back in the day ads played a big part in getting a game over. Some were hits, some were misses but the slogans, artwork and over the top acting made these retro ads if not as big as the video game definitely as memorable. 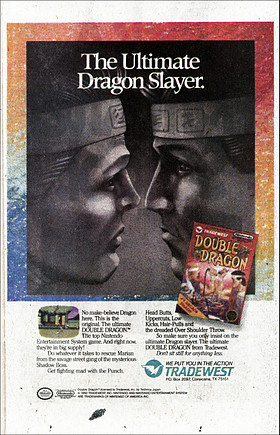 I first played Double Dragon on the Sega Master System (Taking it back) and later got in for Nintendo. This is an ad that had no influence on my choosing. I played the game before I saw the ad and didn’t really notice it until after I already had it. This ad page was in a few of my older comic books. I would gloss over it and go on to the next page.

Though it never stuck out to me, the ad still has a place in my heart. There were a few Double Dragon games’ that I enjoyed (Super Double Dragon being my favorite), plus when I look at this page it reminds me of the stack of comics I spent so much time reading through. 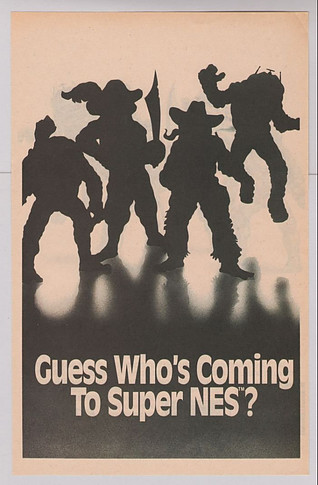 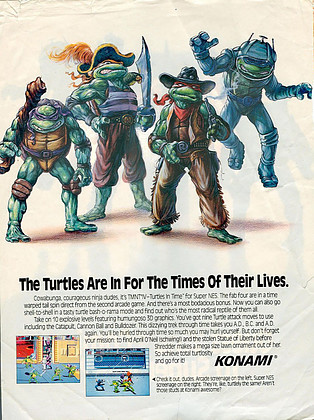 I first saw this ad in one of my Captain America comics. As soon as I saw this, not only was I sold- I had forgotten what the comic was even about. At that time I was still pretty heavy into the Ninja Turtles and the only video game I played based on them was the original arcade game. I was so hyped up by this ad page that I ripped it out of the book just to look at it.

I did get the game but I ruined my book. 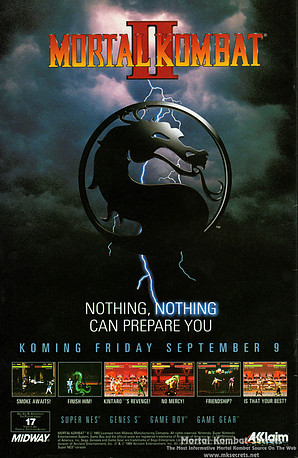 I’ve always been more of a street Fighter guy but I gotta tip my hat to MK2. It remains one of my favorites in the franchise.

Before I saw any advertisements for MK 2, I had already seen it at the arcade at a local store, Unlike the first game, I was excited when the commercials and ads popped up advertising the game coming to home systems. This was one of the few Mk games’ that I wanted to own. Unfortunately, I never got this game and I only played the console version a few times at a friend’s house.

I don’t remember if I saw the ads and commercials first but I do remember this being one of my favorite rentals. I grew up on Marvel. Like many Marvel lovers; Spider-ma is usually a fan-favorite. This game was based on the Spider-man fued with Venom and Carnage in the comics. Since I had a few of those particular books, this was a must play for me.

Unfortunately, Maximum Carnage was another title that I wanted but never got to own.

Here’s a little funny story: My grandmother was going to take me to Funco Land (for those who don’t know, it was GameStop of the 90s). I knew ahead of time and of course I was beyond excited. After my grandmother told me when we would go, right away I knew the two games’ I was looking out for; Maximum Carnage or Mortal Kombat 2. The day finally comes and we get to the store. I run ( I don’t think literally), to the Super Nintendo shelf and look for one of the two games’. After some time of browsing, I don’t see either of my picks. I noticed however, that both games’ were displayed in thee glass cases and both demos were playing- this gave me some hope.

I then went up to the clerk and asked if either game was in stock. This was the first time that I heard that they had to be ordered. This left me 20% confused and 80% disappointed. It didn’t help that both games’ theme music was playing through the store. Not wanting to leave empty-handed, I then went back to the shelf to see if I could find something. After some browsing I chose Ren & Stimpy- Yeah…Ren & Stimpy! No one to blame but myself for that one. Good Times!

When I look back at yesterday, it’s never with the thought of it being better than today. It’s just truly amazing to see changes. This time that I write so fondly about, was at a time when video games’ was at that point bigger than it had ever been but still a niche form of entertainment. With where we are now, with the internet access, how we advertise and market; it’s kind of something that we who were children back then; was sold by paper ad pages and commercials that lasted only seconds. Different time, different world.

In closing, I’m proud to have been a child in those times and I am equally proud to be an adult today in a time of so many new possibilities. I may go as far to say that I’m even proud to be a gamer as well; because video games’ have contributed plenty of happiness in my life- back then and today.

So I end this trip down memory lane by saying: Innocent fun is both ageless and timeless, to gamers young and old, PLAY ON!!